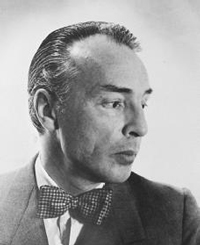 January 22 2013 marked the birthday of Giorgi Melitonovitch Balachivadze, otherwise known to ballet and dance fans all over the world as George Balanchine, born in 1904 in St. Petersburg, Russia. Balanchine, as the co-founder of the New York City Ballet and one of the greatest choreographers of modern ballet, created the aesthetic we can recognise in theatres today, with costumes of often just leotards, tights and shoes. Other works, such as Jewels, are more classical in taste, but still echoes the Balanchine style and legacy throughout the dance sector in the twenty-first century.

Balanchine co-founded the School of American Ballet with Lincoln Kirstein and Edward Warburg in 1934, and consequently created one of his most iconic works, Serenade, as a result of his concern that his young students didn’t understand the difference between class work and perfor­mance. He decided the best way for them to learn was to give them something new and unfamiliar to dance. Balanchine said in an interview years later, “I made Serenade to show dancers how to be on a stage”, adding parts for whoever and whatever his classes consisted of. The first class had 17 girls, which explains the beginning of the piece using 17 dancers, and so on. For the emerging of the New York City Ballet, Kirstein envisioned an American ballet where young dancers could be trained and schooled under the guidance of the world’s greatest ballet masters to perform new, modern repertory, rather than relying on touring, imported artists performing for American audiences.

The School of American Ballet has been the home of New York City Ballet since Balanchine journeyed to the US, which has gone on to become one of the most renowned companies of the world. Today, the company is made up of over 100 dancers.