Celebrating its 65th anniversary, The Chelmsford Ballet Company is proud to present its version of The Nutcracker from 19-22 March at the Civic Theatre in Chelmsford. Some of Tchaikovsky’s most famous melodies set the scene; the story of a little girl’s magical Christmas present. Battle the Mouse King and travel with Clara to the Magical Kingdom of Sweets. Delight in the dance of the Sugar Plum Fairy, be captivated by the Waltz of the Flowers, the flurry of Snowflakes and the candy striped Merlitons, a spectacle for any time of year.

The Company was founded in 1947 by Joan Weston as the Broomfield YMCA Ballet Company in order to give the more senior students at her existing dance school the opportunity to learn and perform to the public. It was after its 1949 performance of Coppelia that the then-mayor of Chelmsford suggested the name ‘The Chelmsford Ballet Company’. Today the Company is led by Artistic Director Annette Potter, a former dancing member. Annette danced many leading roles with the company before moving on to teaching and choreography. She continues to present the high standards of dance and performance for which the Company is recognised.

Since that first performance in 1949, the Company has staged a full-scale production every year as an event in its own right. In 1984 The Chelmsford Ballet Company presented its version of the Royal Ballet film The Tales of Beatrix Potter. This was the first time the ballet had been performed on stage; it was not until 1992 that the Royal Ballet staged its own production at Covent Garden.

The Company has announced that Richard Bermange will return to dance this year as the dashing Cavalier. His Sugar Plum Fairy will be Emma Lister and to complete the exciting Guest line-up, Michael Budd will dance the Mouse King.

Richard trained at Central School of Ballet, London. As a student he danced with Northern Ballet and Ballet Central, and since graduation he has worked with English National Ballet, K-Ballet, Tokyo, Tivoli Ballet, Peter Schaufuss Ballet and The National Ballet of Ireland. Most recently he has worked with Ballet Ireland as an Associate Choreographer.

The Royal Ballet’s Steven McRae and Royal Danish Ballet’s Alban Lendorf are set to dance with American Ballet Theatre in spring 2013 as part of an artist exchange programme at the Metropolitan Opera House.

In return for these tights-and-tunic dancers, American Ballet Theatre will be sending the principal dancer Cory Stearns to The Royal Ballet and soloist Isabella Boylston to dance in the Royal Danish Ballet’s production of The Nutcracker to appear as Exchange Artists.

McRae and Lendorf will be dancing in the spring season, with McRae dancing the role of Lankendem in Le Corsaire in June, and Lendorf dancing the role of Prince Désiré in The Sleeping Beauty in July. As part of the exchange program with The Royal Ballet and the Royal Danish Ballet, American Ballet Theatre’s Stearns will appear with The Royal Ballet, and Boylston will dance the roles of Dew Drop and Sugarplum Fairy in The Nutcracker in December. This exchange of dancers not only presents the skills and talents of the dancers to another audience but also enables the dancers to hone their technique under unfamiliar circumstances and in unfamiliar surroundings.

During his career, McRae has had the opportunity to perform roles such as Prince Siegfried in Swan Lake, Lensky in Onegin, Romeo in Romeo and Juliet, James in La Sylphide, Des Grieux in Manon, Prince Florimund in The Sleeping Beauty, Colas in La Fille mal gardée, the Prince in The Nutcracker and Cinderella, Blue Boy in Les Patineurs and The Chosen One in The Rite of Spring. Lendorf has equally danced roles such as Prince Siegfried in Swan Lake, Prince Désiré in Christopher Wheeldon’s The Sleeping Beauty, Gennaro in Napoli, James in La Sylphide, Armand in Lady of the Camellias, the title role in Apollo and principal roles in Etudes, Other Dances, Tchaikovsky Pas de Deux and Le Corsaire pas de deux.

Just before Christmas 2012, the 120th anniversary of one of the epitomes of classical ballet, The Nutcracker, was celebrated by Google, which launched a doodle to commemorate the first performance of the ballet. The doodle worked to depict a few of the scenes of the ballet, particularly apt in the run up to Christmas with dancers everywhere becoming sugarplum fairies in their tights, tutus and tiaras.

The Nutcracker premiered at the Mariinsky theatre in St Petersburg on 18 December 1892 to a score by Pyotr Ilyich-Tchaikovsky, which has become world-famous and is instantly recognisable. Today The Nutcracker is performed all over the world by many different ballet companies, become various versions for film and even screened to cinemas in the UK recently. However, the ballet was poorly received before US-choreographer George Balanchine re-imagined the original choreography by Marius Petipa, transforming it completely.

As a result of this, it is presumed that much of the original choreography of Petipa’s production debut is no longer seen by audiences, flocking to theatres worldwide to experience this festive production full of magic and sparkle. Balanchine’s version of the ballet saw new elements make their way into the choreography and synopsis for the New York City Ballet in the twentieth-century, gradually spreading around the world.

Alternative versions of this ballet favourite include Nutcracker: The Motion Picture (1986), The Nutcracker Prince (1990), Barbie in the Nutcracker (2001), and The Nutcracker in 3D (2010), in addition to Matthew Bourne’s version as Nutcracker! and Mark Morris’ The Hard Nut as additional re-imaginings.

Unfortunately Tchaikovsky died aged 53, less than a year after The Nutcracker’s release, meaning he was unable to enjoy the ballet’s success, yet today there is plenty of opportunity to experience the captivating production. 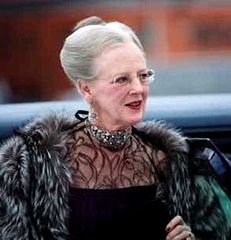 During the festive season, the dance world is abundant with Holiday inspired productions, and 2012 is no different. The Nutcracker is always a sure-fire family favourite, full of ballet slippers, magic and mystery, however one version this year is standing out for a very different reason. Queen Margrethe of Denmark, it has been discovered, has designed all the costumes (more than 100) and four large stage sets for The Nutcracker which is currently being performed in Copenhagen by the Royal Danish Ballet at the Tivoli Theatre until 22 December 2012.

Choreographed by Artistic Director Peter Bo Bendixen, The Nutcracker is displaying Royal flourishes as a result of the Queen’s talents. For the past two years the Queen has been immersed in every aspect, from sketching each costume individually (as a celebrated artist under a pseudonym) to designing the set and correcting the choreographer on historical and cultural inaccuracies. Members of the ballet company have had to experience costume fittings with the Queen, and she has been fully involved in the whole process, regarding the production as “work” and making the dancers feel as comfortable as she possibly can.

This year the Queen of Denmark celebrated forty years on the throne, but has demonstrated a clear talent in the land of theatre, ballet, and the Kingdom of Sweets, drawing upon much knowledge and research to aid her life beyond the palace walls. The director of the production aimed to make the Danish Nutcracker ‘feel’ very home-grown and Danish, with the Kingdom of Sweets replaced by Copenhagen’s Tivoli gardens, and the fairy-tale writer Han Christian Anderson distributing the presents on Christmas Eve.

It is clear that 72-year-old Queen Margrethe devotes much of her time to the arts, having attended almost every ballet shown in Copenhagen in addition to having taken ballet classes for the past thirty years with a group of her childhood school friends.