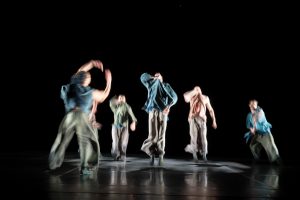 BalletBoyz, the multi award-winning dance troupe, will soon present Deluxe, its all-new dance show in celebration of the company’s 20th anniversary year. The double-bill with a special video introduction brings together collaborations from some of the world’s most inventive and thought-provoking artists, including an all-female team of choreographers. Deluxe embarks on a nationwide UK tour from 1 March through to May, including three shows at London’s Sadler’s Wells from 25 to 27 March.

Fusing dance with original music in the company’s unique and unmistakable style, Deluxe will see Shanghai-based dancer and choreographer Xie Xin (TAO Dance Theatre) make her UK debut choreographing a new piece for BalletBoyz set to an original score by composer Jiang Shaofeng, whilst Maxine Doyle (Punchdrunk) will present work to live jazz music by composer Cassie Kinoshi, of the Mercury Prize-nominated SEED Ensemble. A short film by dancer and choreographer Sarah Golding will start the evening and introduce audiences to the dancers.

Founded in 2000 by former Royal Ballet dancers Michael Nunn and William Trevitt, BalletBoyz is regarded as one of the most original and innovative forces in modern dance through its celebrated stage and television work. The company has made 38 pieces of new work for the stage over the last 20 years, won 13 international awards and became the first dance company in history to win a Rose d’Or Award for its first feature film. BalletBoyz has collaborated with 25 choreographers, ranging from some of the world’s finest and most established to emerging and unknown choreographers including Christopher Wheeldon, Akram Khan, Kristen McNally, Matthew Bourne and Liv Lorent to name a few.