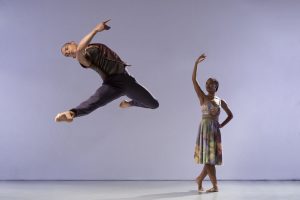 On 7 & 8 March at Sadler’s Wells, Richard Alston Dance Company will give its final ever performances. Alston is determined for his company to go out on a high as they bid goodbye after 25 years. The Final Edition programme features three London premieres, two by Alston and one by associate choreographer Martin Lawrance.

The evening opens with Bari, a joyful curtain raiser for the graduating students of London Contemporary Dance School where Alston himself was one of the first intake of students from 1967 to 1970. Bari is inspired by south Italian Pizzica, music for the traditional dance to overcome poisonous spider bites.

Associate Choreographer Martin Lawrance has been part of Richard Alston Dance Company since 1995 when he joined as a dancer. His fast choreography is usually set to highly contemporary scores but for A Far Cry he has turned to Edward Elgar’s Introduction and Allegro Op 47 to create his final work for the company. A Far Cry tries to balance the sadness of saying goodbye whilst celebrating the achievements and joy.

Shine On is the tenth work Alston has created to the music of Benjamin Britten (the composer he has choreographed to more than any other). A piece for the whole company, it is danced to Britten’s 1937 song cycle On This Island set to five poems by WH Auden. The poems are typically complex and ambiguous whilst Britten’s setting of them is pared down and starkly effective. The score is performed live by soprano Katherine McIndoe and pianist Jason Ridgway.

The evening ends with Voices and Light Footsteps inspired by the sensuously expressive vocal madrigals and instrumental sinfonias of Baroque composer Claudio Monteverdi, whose music Alston believes sounds as extraordinary now as when it was first written.