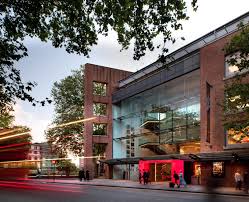 The Young Associates programme was launched in February 2018 and supports early career choreographers, deepening their understanding of their own artistic practice, whilst gaining valuable insight into dance production. The artists receive a tailored programme of professional development and support, including the opportunity to present their work as part of the Sadler’s Wells programme.

London born and Bristol raised, Olive Hardy started dancing for Rise Youth Dance and performed with the company for most of her young adulthood, under the direction of Helen Wilson. Her training began at Trinity Laban Conservatoire of Music and Dance, and she graduated from London Contemporary Dance School in 2019.

Vidya Patel is a Birmingham based Dance Artist with training background in Kathak learning from Guru Sujata Banerjee. After graduating from the South Asian Strand at Centre of Advanced Training Dance programme, Vidya represented the South Asian Category in the Grand Finals of BBC Young Dancer 2015. She has since performed in international touring works created by critically acclaimed artists Sir Richard Alston, Gary Clarke and Akademi.

Born in Leeds, John-William Watson began his training at Phoenix Dance Theatre’s Youth Academy and CAPA College. During this time he was also a member of the National Youth Dance Company for two years; under the artistic direction of Sidi Larbi Cherkaoui and Michael Keegan-Dolan. He then moved Belgium to study at The Royal Conservatoire of Antwerp, where he was the Wild Card contemporary finalist in the BBC Young Dancer 2017 competition.

Scottish-born interdisciplinary artist, Magnus Westwell, is a graduate of The Dance School of Scotland and Rambert School, where he was the recipient of a scholarship from the Veronica Bruce Memorial Trust. He has choreographed and produced work which has been performed at venues across Europe – his most recent commissions have been shown at ADE (Amsterdam Dance Event), The Lowry, The Silver Building, King’s College Chapel and on BBC4.