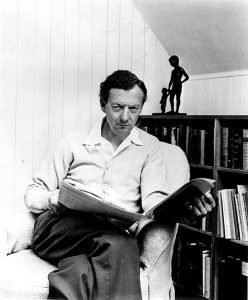 Richard Alston Dance Company has announced the programme for its final ever performances at Sadler’s Wells on 7 & 8 March, the climax of the Final Edition Tour.

For Shine On, his last work for his company of 25 years, Alston, who was recently knighted for his services to dance, has chosen the music of Benjamin Britten. Britten is the composer he has choreographed to more than any other. Shine On is danced to Britten’s 1937 song cycle On This Island, his first for voice and piano. At Sadler’s Wells, it will be performed live by soprano Katherine McIndoe and pianist Jason Ridgway.

Alston’s poignant Voices and Light Footsteps is inspired by the expressive vocal madrigals and instrumental sinfonias of Baroque composer Claudio Monteverdi. The name is taken from Henry James’ description of Venice in the evening and Alston used it once before, for a piece made for Ballet Rambert in 1984. Voices and Light Footsteps has lighting design by the company’s Associate Choreographer, Martin Lawrance. The programme opens with a Curtain Raiser made by Alston for graduating students of London Contemporary Dance School where he studied from 1967 to 1970.

Richard Alston choreographed his first work in 1968, as one of the twelve students of the newly formed London Contemporary Dance School. On leaving in 1972, he formed the UK’s first independent dance group, Strider. In 1975 Alston went to New York to study at the Merce Cunningham Dance Studio. On his return, he worked throughout the UK and Europe as an independent choreographer and teacher. In 1980 Alston became Resident Choreographer with Ballet Rambert and later was appointed Artistic Director, from 1986 to 1992. He became Artistic Director of The Place in 1994 and launched his own company. This season sees Alston take up the position of Resident Choreographer with New York Theatre Ballet.