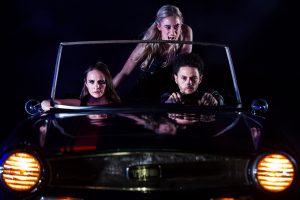 When it comes to multi-award winning dance theatre companies, MARK BRUCE COMPANY is in a class of its own. Winner of the Sky South Bank Arts Award for ‘Dracula’ and a number of Critics’ Circle awards and nominations for various productions, MARK BRUCE COMPANY consistently presents work of infinite mystery and drama to increasing audiences in the UK and abroad.

The company’s new production, ‘RETURN TO HEAVEN’, kicks off its 2020 UK tour at the Merlin Theatre in Frome (where the company has its own studios) on 30 January. It will then visit Bristol, Poole, London, Winchester, Ipswich, Portsmouth and Aberystwyth.

Drawing on the mythology of Ancient Egypt, two intrepid explorers – played by Dane Hurst and Eleanor Duval – set off on a journey towards a mythical land where the demons and gods they disturb unleash something within themselves. The journey descends into a nightmare when the explorers find themselves being hounded by a freakish compound of scientists and supernatural forces who will stop at nothing in order to coerce the explorers to play their part in the resurrection of an ancient deity.

The company’s Artistic Director, Mark Bruce, is inspired by mystery and imagination, by the dark nooks and crannies of human behaviour, by myths and legends, by music of many eras and by physical expression. Bruce employs a unique choreographic language, distinctive imagery and eclectic musical scores for every production which are further lauded for their filmic quality. Mark Bruce has choreographed, directed and danced internationally for over 25 years, working with Rosas, Bern Ballet, Ballet Black, Introdans, Igloo, Probe, and DJazzex among others.

Since forming the Mark Bruce Company in 1991, he has created a portfolio of dramatic dance theatre productions including Angel (1996), the collaboration with PJ Harvey and John Parish titled Dance Hall At Louse Point (1997), Sea of Bones (2006) Love and War (2010), Made in Heaven (2012) and the award-winning Dracula (2013). The Odyssey followed in 2016 and in 2018 Bruce’s menacing version of Macbeth toured the UK.