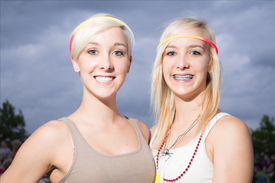 A new musical, named Identical, is on the lookout for two identical twin leads to star in the show, to open in the summer of 2020. Based on the popular tale The Parent Trap by Erich Kästner, which inspired the Disney films featuring Hayley Mills in 1961 and Lindsay Lohan in 1998, the new musical will be directed by Trevor Nunn (Fiddler on the Roof) and has music and lyrics by Stiles and Drewe, and book by Stuart Paterson (The Jungle Book).

The show will have its world premiere at Nottingham Playhouse (as part of the theatre’s recently announced summer 2020 season) and it will then transfer to Theatre Royal Bath from 4 to 19 September. The timeless tale of two identical twins, separated as babies, and their wily determination to stitch their family back together, will delight audiences as the films have done too. The story is story packed with humour and characters which are hugely relatable, making the production a natural musical to be retold for a 21st-century audience.

Stiles and Drewe are musical theatre royalty, so it is a huge coup for the musical Identical to be working with the pair as they adapt Erich Kästner’s classic tale. Whilst the new musical is sure to be a crowd pleaser, it will be interesting to see if it stands the test of time and runs for a prolonged period, on a longer tour or perhaps in a transfer to a theatre in the capital.

The first round of auditions for identical twin girls will take place in London and Nottingham. The girls should be 9 to 12 years old and under 4 foot 10. The twins must be able to sing well but no previous acting experience is required.