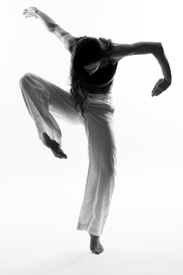 British dancer and choreographer, Anna, trained at the Rambert School. Anna was a company dancer for Tavaziva Dance for 10 years, as well as working with Shobana Jeyasingh, Motionhouse, Neville Campbell and others.

Anna formed Watkins Dance Company in 2011, receiving Arts Council England funding, touring across the UK and Internationally. In 2017 – 2018 she was awarded Associate Artist at Swindon Dance and selected as one of the four choreographers for the Cohan Collective 2018.

This year, Anna was commissioned by Swindon Dance to create and perform in a new duet, for Swindon Spring Festival of Literature and the Arts. The duet was then performed in as part of DAP Festival 2019 – International Dance and Visual Arts Festival.

Anna returned to the Cohan Collective with Sir Robert Cohan, as one of the selected choreographers for the Development stage in August 2019 at Pavilion Dance South West.

Anna continues her work as a dancer, choreographer and working with young people to support their careers in dance.

Anna was first interviewed for the Dance Direct blog in March 2017.

What’s changed since we last spoke?

The past two years have been a whirlwind of new and exciting moments for me as an artist. Involving more focus on my company work, inviting new ways of collaborating and working with some really wonderful artists and organisations as a freelancer.

Spring 2017, as a choreographer, I was part of Organic Entity, a triple bill tour with two other choreographers funded by Arts Council England and East London Dance Ideas Initiative Fund, presenting a solo work HUMAN ANIMAL. At the same time I was awarded Associate Artist at Swindon Dance for one year, including a commission to present my work. I received Arts Council England funding for the Spring 2018 tour including two works and a short dance film in collaboration with Film Oxford. I was then selected as one of the four choreographers for the Cohan Collective, with mentors Sir Robert Cohan and Eleanor Alberga directed by Yolande Yorke-Edgell of Yorke Dance Project.

Between these three major moments, I was guest teaching and choreographing all over the UK for professional and youth dancers including; Rambert, choreographer for Phoenix Dance Theatre Youth Academy, BalletBoyz Dancers’ Course, Northern School of Contemporary Dance, Rambert School, Swindon Dance CAT, The Place, Trinity Laban and many more wonderful establishments. I have been involved in The Playground at Rambert over the past two years as a dancer and choreographer, which is an amazing platform for professional artists to collaborate, create and share new work, with cross art forms. Admiration to Julia Gillespie, Nancy Nerantzi and Simone Damberg Würtz, who make it all happen!

2019 has continued to be full of inspiring and unexpected moments. Four months non-stop alternating roles from dancer, choreographer and guest teacher. Including; a commission by Swindon Dance to create and perform in a new duet, for Swindon Spring Festival of Literature and the Arts. The duet then went international in June as part of DAP Festival 2019 (ITALY) – International Dance and Visual Arts Festival. At the same time, being commissioned by Film Oxford to create and feature in a new short dance film for project FLUX. The new film MORTELLE and performance filming of new duet REPEL, were screened at various film festivals including Modern Art Oxford | Dancin’ Oxford, Leeds and Reading Festivals. I was then selected as a dancer for Phoenix Dance Theatre ‘Choreographers and Composers Lab’, working alongside the company dancers, which was very valuable for me as a dancer this year. I finished this wonderful period invited back to Cohan Collective for Development Week with Sir Robert Cohan creating a short work.

What is your proudest achievement in the last two years, as a choreographer, dancer and guest teacher.

My proudest achievement was performing in my own work in the UK and internationally this year.

Describe a day in your life – how does the reality shape up to your vision of how a freelance dance artist worked when you first started out?

Freelance life is a constant surprise! It happened naturally within the opportunities that I was given and attracted to, rather than a decision to be freelance, therefore it is normal to me! I have been working as a freelance artist for 15 years next year. For me it has varied from being on contract as a dancer on tour in a company, freelance performance projects, to running my own projects and independent commissions.

Describe the importance of female leadership and how it fits into your life and work.

It is very important female artists are recognised within our industry, in any sector. I think we all face difficulties for different reasons and it is necessary to support one another and build each other as artists. My mother was a fine example of female leadership in every aspect of her life, and I naturally follow her example.

My work has focused on female leadership including some of the choreography that has been created, but that does not mean males are excluded. I aim to profile female artists within my work to acknowledge the talent and strength there is and provide a platform, but also to be inclusive, as we should all be standing on the same platform.

Who or what influences you every day?

I am influenced by so many talented artists surrounding me. Music can be a strong influence, it can determine sometimes what I express on that day within my work. The experiences in life and the desire to keep doing it. Recently I have been working more with film, this has influenced and inspired my work in a new direction, which I am really enjoying.

What’s the most important lesson you have learnt, in life, dance or both?

Nothing is permanent and to give as much as you can until you can’t! Be generous, humble and who you are. I am very grateful to be able to do what makes me excited everyday. I have to look back to appreciate all the opportunities I have been given to where I am today and the hard work it has taken to achieve all of this.

Over the next month I will be supporting an emerging singer – songwriter choreographing and featuring in her new music video. I will also be working on a couple more exciting film projects, including a new collaboration with Film Oxford.