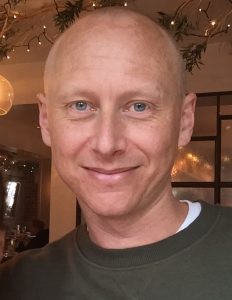 Tom Dale graduated from Laban, winning the centre’s Award for Outstanding Achievement in Choreography. He danced with leading choreographers and companies, including Mathew Bourne’s Adventures in Motion Pictures, before focusing on creating his own work and forming Tom Dale Company.

It is here that Tom is able to pursue his artistic vision, bringing together artists to collaborate on bold, exciting, innovative projects that interrogate art in motion and have a particular synergy with the digital arts and electronic music. As well as creating all of the company’s work to date, including critically acclaimed pieces Rise; I Infinite; Refugees of the Lost Heart; and Digitopia, Tom has created A New Chimera for Fertile Ground; Dark Clouds are Smouldering into Red with Sinfonia Viva; Subterrania, which was part of In the Dust for 2Faced Dance Company; Dance Please produced by TPO/Crying Out Loud/Theatre Is; and I am a believer for artist Reza Aramesh.

Tom also leads educational projects throughout the UK and internationally, working with Sinfonia Viva, all of the UK’s major conservatoires for dance and for National Centres for Advanced Training.

Have always wanted to be involved in dance and the stage?

No, my first love was football and I played to a good level, but when I stopped playing around the age of 16 there was a massive gap in my life as I moved into studying A levels. I had chosen Maths, History and Chemistry. Chemistry was going so badly as we had done amalgamated science for GCSE which hadn’t prepared us well. I dropped Chemistry for the only subject that was timetabled alongside it – Dance! I got absolutely hooked very quickly and our teacher took us up to London some weekends to see London Contemporary Dance Theatre and other great companies. I knew I could dance because it was the nineties and there was a big rave scene, and loads of people wanted to dance for hours, especially me. I was massively into electronic music and this scene but initially I had no idea what contemporary dance was.

I got a scholarship to train at Laban. I had an amazing time there, had my horizons broadened and was inspired to work hard whilst at the same time managing to have fun. Training at Laban was brilliant! Such sweaty days I can’t believe how hard we worked looking back but it was a really inspiring place to go. I suddenly met people from all over the world both teachers and other students who came to dance with so many different perpectives, and moving to London was no small thing too. I found technical training really challenging at first because I came to dance quite late in comparison to most. I was much slower than everyone else to pick up routines and phrases but I knew I could actually move really well so it was really frustrating. Creatively it was great though and the technical side soon picked up once my brain got to grips with it.

I have no set day now because it all depends on what the project we are working on is and whether I am in rehearsals, researching or teaching, working in the office or in meetings. Yesterday started with breakfast with my twin girls Lila and Cleo, walk to school, studio session with Eleesha Drennan who is making a solo on one of our dancers for the upcoming tour, production meeting for Step Sonic then teaching in the evening. A packed day but they are not all like that, tomorrow I will just be in the studio working on Step Sonic at Dance4’s studios.

I don’t know but perhaps creating I Infinite. Having just been turned down on my funding application to Arts Council to make, it I decided to make it anyway with a small amount of money from Dance4 and Deda. I don’t know how we did it with so little money but we pulled off a stunning piece of work which we have been touring internationally ever since. I made this piece in Nottingham where I first worked with long term collaborator Barret Hodgson. Shortly after this me and my wife decided to move to Nottingham, have started a family and really found a home for TDC. We have been here for 7 years now.

It was definitely just after leaving New Adventures where I was performing in Mathew Bourne’s Swan Lake. I managed to damage my inner ear somehow either through exhaustion or something else. It took a long time to get diagnosed and better and I had to re-train my balance mechanism in the end. This was a hard time where I had to re-evaluate my career and I felt like I was walking on sponge for 3 years. Once I really decided that I wanted to be back involved in dance in the end my balance got much better than it ever was.

What’s the most rewarding thing about dance in general?

It gives people the opportunity to be generous. Just seeing people believe in themselves too and subsequently achieving and becoming awesome inspiration for others is great. It is not something that can be faked.

The fact that it both seems to be the cheapest and the most expensive art form to make. All you need is time, space and your body and you can be prolific and just make make make but as soon as you want to work with others then everything changes and a thousand more considerations need to be respected which costs and so it is much much harder to be prolific.

Who or what inspired you to create Step Sonic?

Simply my own practice, I have always used sound effects when creating movement to emphasise dynamic. Now we are able to create amplified environments to work inside allowing us to shape and manipulate both movement and sound dynamics as one. I’ve always been interested in creating sonic landscapes and music for our pieces and now we can do that using our movement. It is a genuinely exciting step forward from both a choreographic and compositional perspective.

What is your advice to an aspiring choreographer?

Do what you want, that’s all you can do really.