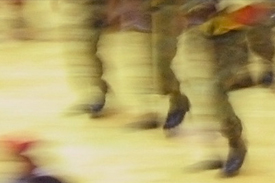 Following the success of ETM: Double Down at Sadler’s Wells, named one of the Guardian’s Top Ten Dances of 2017, Dorrance Dance returns from 14 – 16 November with the critically acclaimed Myelination, alongside two shorter works.

Transforming the world of tap dance, choreographer, performer and Artistic Director Michelle Dorrance has dedicated her work to exploring the rich traditions and breaking new boundaries of America’s original dance form. In this diverse triple bill, her company Dorrance Dance expands ideas of what tap dance can be.

In the Bessie Award-winning Three to One, Dorrance places herself between two barefoot contemporary dancers, performing to the music of Aphex Twin and Thom Yorke. In Jungle Blues, lively humour is set to the New Orleans swagger of the Grammy Award-winning Branford Marsalis.

Dorrance Dance is an award-winning tap dance company based in New York City. The company’s work aims to honour tap dance’s history in a new, dynamic, and compelling context; not by stripping the form of its tradition, but by pushing it – rhythmically, technically, and conceptually.

Founder and Artistic Director Michelle Dorrance grew up performing with North Carolina Youth Tap Ensemble, and has since performed with STOMP, Savion Glover’s Ti Dii, and Jon Batiste and Stay Human on CBS’s The Late Show with Stephen Colbert, among others. Dorrance’s choreography has been seen around the world, and recent commissions include works for American Ballet Theater, the Martha Graham Dance Company, and Vail Dance Festival. Her numerous accolades include a MacArthur “Genius” Fellowship, a Princess Grace Award, a Capezio Award and many more.