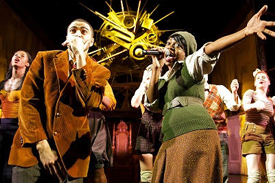 ZooNation: The Kate Prince Company’s award-nominated Some Like It Hip Hop had audiences on their feet at its world premiere in 2011. Now the acclaimed show returns to The Peacock for a run from Wednesday 23 October – Saturday 9 November, following a UK tour. Some Like it Hip Hop is directed by Sadler’s Wells Associate Artist and ZooNation founder Kate Princeand features music by DJ Walde and Josh Cohen.

The celebrated production unites sensational dancing with a clever storyline, set in a city where books are banned, and where women are kept subservient to men. When Jo-Jo and Kerri are discovered breaking the rules of the city, they are thrown out. They decide they have only one option – to return to the city dressed as men. It doesn’t take long for the two women to prove their worth, and for Jo-Jo to fall in love with Simeon, the only educated man in the city. If only she wasn’t wearing a moustache… With a nod to Billy Wilder’s film and Shakespeare’s Twelfth Night, the comical tale of love, mistaken identity and revolution is played out in the company’s trademark style.

Some Like It Hip Hop is a ZooNation: The Kate Prince Company and Sadler’s Wells production, supported by Arts Council England, with original support from Curve Leicester and Wales Millennium Centre.

The show will also visit: