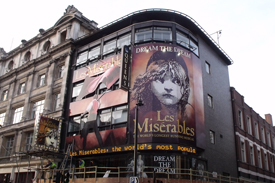 The Queen’s Theatre on Shaftesbury Avenue, which recently closed for renovation, will be renamed the Sondheim Theatre when it reopens. The space is currently home to Les Misérables, and will change its name to honour the award-winning composer Stephen Sondheim when he turns 90 in March. The move makes Sondheim the only living artist to have a theatre named in his honour on both Broadway and in the West End.

The Queen’s Theatre and the original production of Les Misérables closed earlier this month to make way for new renovations, and from 10 August to 30 November there will be a special concert production of the long-running show at the Gielgud Theatre, adjacent to the Queen’s. The theatre will reopen with Les Misérables on 18 December, newly named as the Sondheim Theatre.

For the owner Cameron Mackintosh, he has tried to build a studio theatre in central London named after Sondheim for the past 25 years. He therefore felt this major refurbishment of the theatre, which has housed the work of Sondheim, was the perfect moment to put his name to the building. Sondheim has always been part of British theatre, and saw his first play in 1958. He has experienced Cameron Mackintosh’s support and friendship ever since Mackintosh produced Side by Side by Sondheim in 1976, and of course he is synonymous with British theatre.

Whilst the theatre is closed for renovation, the tour of Les Misérables continues to run, and some have surmised that it could run as long as the show in London’s West End. It continues to delight audiences – tourists to hardcore fans alike – and the theatre’s reopening is highly anticipated.