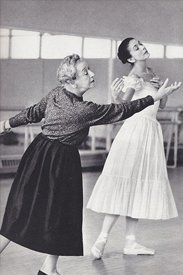 This June, The Royal Ballet will pay tribute to Prima Ballerina Assoluta Dame Margot Fonteyn with a special programme of works celebrating the centenary of her birth.

Margot Fonteyn: A Celebration will take place on 8 June, with a performance of The Firebird, one of her signature ballets, alongside a selection of other works closely associated with one of ballet’s most revered and influential dancers. The evening will celebrate the life and legacy of Margot Fonteyn, as an icon of British ballet and a celebrity beyond the stage. Her impact and influence was vast and she captured the hearts of the Company and audiences all around the world.

Fonteyn was born in Reigate, Surrey, and studied in the UK and Shanghai. She made her debut with the Vic-Wells ballet while still a student, before joining the Company in 1935 – her special qualities immediately recognised by Director Ninette de Valois. She was renowned in classics such as The Sleeping Beauty and became muse to Frederick Ashton, Founder Choreographer of The Royal Ballet, who created many roles for her including Ondine, Sylvia and Chloë in Daphnis and Chloë. She forged distinguished dance partnerships with Robert Helpmann, Michael Somes and latterly with Rudolf Nureyev.

This celebration will also include a free exhibition of Margot Fonteyn-related items from the Royal Opera House archive as well as a series of talks and Insights celebrating her legacy. Further details will be announced in due course.

Under the directorship of Kevin O’Hare, The Royal Ballet unites tradition and innovation in world-class performances, and is a driving force in the development of ballet as an art form. It brings together today’s most dynamic and versatile dancers with a world-class orchestra and leading choreographers, composers, conductors, directors and creative teams to share awe-inspiring theatrical experiences with diverse audiences worldwide.