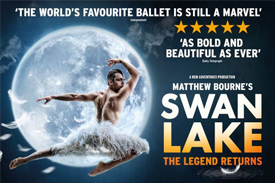 The legendary and award-winning dance production, Matthew Bourne’s Swan Lake, will be screened in cinemas nationwide on 21 May. It has become a modern classic, much beloved by the British public and throughout the world. Its popularity has never been greater and several generations of audiences have been inspired and moved by its universal story of love and acceptance. 24 years after Swan Lake was first performed more people than ever will be able to experience the dramatic power and mesmerising performances on the big screen.

The New Adventures production will come to cinemas with a fresh look for the 21st century, as daring and beautiful as ever. This thrilling, audacious and witty production is perhaps still best known for replacing the female corps-de-ballet with a menacing male ensemble, which shattered convention, turned tradition upside down and took the dance world by storm. Retaining the iconic elements of the original staging, Matthew Bourne and award-winning designers Lez Brotherston (Set & Costumes) and Paule Constable (Lighting) have created a stunning re-imagining of this classic New Adventures production. Filmed live at Sadler’s Wells, London in January 2019, Matthew Bourne’s Swan Lake stars Will Bozier as The Swan/The Stranger, Liam Mower as The Prince and Nicole Kabera as The Queen.

Matthew Bourne’s New Adventures is a ground-breaking British dance-theatre company, famous for telling stories with a unique theatrical twist. For over 30 years Matthew Bourne and New Adventures have delighted, inspired and nurtured people of all ages and backgrounds: audiences, artists and the next generation. The company creates world class productions and engaging projects, reaching thousands worldwide every year.

New Adventures has received numerous international awards and an incredible 12 Olivier Award nominations, including six wins. Over the past 30 years New Adventures has created 11 full-length productions and a triple-bill of short works. This award-winning repertoire has inspired and thrilled millions of people worldwide. In 2019 the company premieres its 12th full-length production, Romeo and Juliet. Investing in the future of dance and theatre, New Adventures engages in inclusive projects with thousands of people of all ages and ability, as well as emerging artists across the UK and around the world.