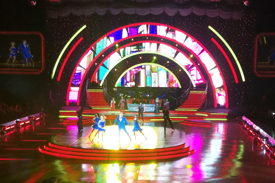 The tour’s host was former Strictly winner Ore Oduba, who triumphed on the 2016 series of the TV show with professional partner Joanne Clifton. Craig Revel Horwood, Dame Darcey Bussell, Shirley Ballas and Bruno Tonioli joined him and sat on the judging panel, as they do every Saturday night, and the tour also featured music from the Strictly singers and the Strictly live band.

Arena audiences were in for a real treat, with fantastic evenings of entertainment, showcasing all the choreography and live music that Strictly is famous for. The dance routines, breath-taking each week Strictly is on our televisions, brought all the glitz, glamour and magic of the TV show live on stage – a must-see spectacle for fans of all ages.

The couples danced two of their favourite routines from the live shows each while the judges offered their comments and marks out of 10. As well as enjoying the routines, arena audiences had the power to decide who won the coveted Glitterball Trophy at the end of each show. After each celebrity couple performed, the tour judges provided their invaluable critique and scores – but the audience also voted via text for the favourite couple to decide who won.

After the final performances in London, Joe and Dianne were named the 2019 tour champions with the most wins over the past month of dancing.