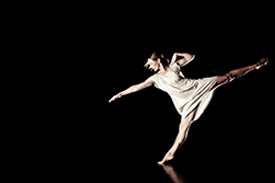 2019 sees Yolande Yorke-Edgell’s contemporary ballet company Yorke Dance Project celebrating its 20th anniversary. Yorke-Edgell set up her company in Los Angeles in 1999, relaunching it when she returned to London 2009. Since then, the company has attracted increasing acclaim for presenting dance by past masters and emerging artists from the UK and the USA, performed by exceptional dancers.

For TWENTY, Yorke-Edgell has curated a celebratory programme which sums up her company’s philosophy. It features new works by Robert Cohan CBE, LA-based choreographer Sophia Stoller and Yorke-Edgell herself, alongside the first restaging of Sir Kenneth MacMillan’s Playground since its Edinburgh Festival premiere by Sadler’s Wells Ballet in 1979. Playground is performed to music by Gordon Crosse, and Yolanda Sonnabend’s original set and costume design are being reimagined by MacMillan’s daughter, Charlotte MacMillan. Original cast members Susie Crow and Stephen Wicks are working on the recreation.

Since legendary contemporary choreographer Robert Cohan returned to live in London in 2013, Yorke-Edgell has been determined to preserve his legacy and to support him in the creation of new work. As Cohan approaches his 94th birthday in March, he is creating his sixth work for Yorke Dance Project. The work for nine dancers is his first for a large ensemble for 20 years. Communion is set to music by Nils Frahm and designed by Cohan’s former London Contemporary Dance Theatre collaborator, John B Read.

Between and Within is a new work by emerging LA-based choreographer Sophia Stoller with original music by composer Justin Scheid. The creation of the piece began during the Cohan Collective residency in LA in January 2017. Yorke-Edgell’s latest work Imprint pays tribute to the three choreographers who have been most important and influential throughout her career as a dancer: Richard Alston, for whom she danced at both Rambert and his own company, Bella Lewitzky, whose LA company she joined in 1994, and Robert Cohan, with whom she has worked so closely over the past few years.