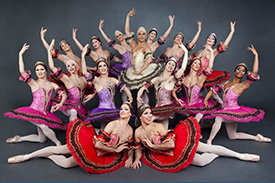 Last seen in the UK in 2015, Les Ballets Trockadero de Monte Carlo, the multi-award winning all-male, comedy ballet company, will return to the UK and receive its Ireland premiere in 2018 during an eight-week, twelve-venue tour beginning at The Peacock, London on 11 September. It will conclude at the Grand Opera House, Belfast on 3 November.

For more than 40 years, Les Ballets Trockadero de Monte Carlo (affectionately known as “The Trocks”) has been delighting audiences of all ages at sell-out performances with their huge sense of fun. Hailing from New York City, the Trocks are now loved worldwide for their spoof performances and hilarious homages to classical ballet and modern dance, where each of the 18 dancers transform into two personas, male and female. Every performance is full of tutus and testosterone, fake eyelashes and hyperbolic prima ballerina attitudes; however, what makes the company special is its immaculate dance technique and daring physicality, and unmatchable comic timing.

The original concept of Les Ballets Trockadero de Monte Carlo has never changed. It is a company of professional male dancers performing the full range of the classical ballet and modern dance repertoire. The comedy is achieved by incorporating and exaggerating the foibles, accidents, and underlying incongruities of serious dance. For the future, there are plans for new works; new cities, states and countries to perform in.

The Trocks have performed in over 600 cities in 38 countries. Following their last UK tour, The Trocks were nominated for an Outstanding Company Award at the Critics’ Circle National Dance Awards (2016, UK) alongside Bolshoi Ballet, English National Ballet, Northern Ballet and Scottish Ballet. The 2018 engagement marks the company’s fifteenth visit to the UK and first time in Ireland, and follows extensive tours across the USA, Japan and Europe. The Trocks’ phenomenon moved from stage to screen in Rebels on Pointe, the first-ever feature documentary celebrating the world famous company.