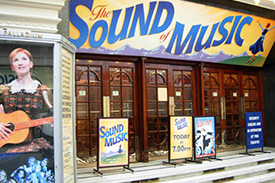 Bill Kenwright’s esteemed production of The Sound of Music is to embark on a new UK tour in 2018, it has recently been announced. As such an iconic musical, this will delight musical theatre fans across the country, able to see a timeless classic on their doorsteps. The show opens at the Bord Gais Energy Theatre in Dublin on 19 December and will then embark on the tour from 9 January at the Churchill Theatre in Bromley.

Lucy O’Byrne will star as Maria, having performed the role in the same show previously. She will be joined by EastEnders actor Neil McDermott as Captain von Trapp. O’Byrne is known for becoming a runner up in The Voice on BBC One. Since leaving the 2016 tour of The Sound of Music she has performed as Fantine in Les Misérables in the West End, and is well-versed with the boards of the musical theatre stage. McDermott’s roles include Chief Weasel in The Wind in the Willows and Lord Farquaad in Shrek, so many audience members may have already seen him perform on stage.

The classic musical is written by Richard Rodgers, Oscar Hammerstein II, Howard Lindsay and Russel Crouse, and first debuted on Broadway in 1959. To see it back on stage is a huge coup for the musical theatre world. The musical follows the story of Maria who takes a job as a governess for a large family in Austria, weighing up her life as a nun in a convent during World War Two. Including songs such as “Edelweiss”, “My Favourite Things”, “Do-Re-Mi” and “Climb Ev’ry Mountain”, the tale is one for all the family.

The Sound of Music will run at Dublin’s Bord Gais Theatre from 19 December to 5 January, and will tour to venues including Churchill Theatre in Bromley, New Alexandra Theatre in Birmingham, King’s Theatre in Glasgow and Manchester Palace Theatre.