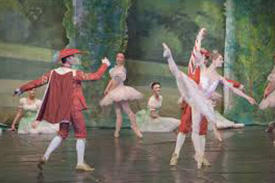 Birmingham Royal Ballet has announced its first ever relaxed performance, adding to the fast-growing repertoire of relaxed performances staged across London and the rest of the country. The relaxed performance will take place on 20 February 2018 at the Birmingham Hippodrome; it will have a shorter running time than usual, with changes to lighting, sound and seating to make the performance and auditorium a more inviting and welcoming space.

Birmingham Royal Ballet’s The Sleeping Beauty is being adapted to cater for those on the autistic spectrum, with a learning disability or a sensory and communication disorder. This will mean even more families can enjoy the magic of the classic tale, transformed into a ballet, as well as children that may not have the chance to attend a dance performance of this kind. This live performance will be staged in an adapted environment where formal theatre rules don’t apply.

The Sleeping Beauty will mark the first time the company has staged a relaxed performance, a practice that has become increasingly common in theatre. Birmingham Royal Ballet also has announced Sleeping Beauty Dreams, a programme that gives dance students of all ages the opportunity to perform alongside the company’s dancers. It will take place over four months, focusing on developing dance talent in the region, and culminating in a performance on 19 February 2018.

Both Sleeping Beauty initiatives coincide with the company’s national tour of Tchaikovsky’s ballet, which is choreographed by Marius Petipa. After performances at Southampton’s Mayflower Theatre, The Sleeping Beauty will run at Birmingham Hippodrome from 13-24 February, before touring to Salford, Cardiff and Plymouth. Audiences all over the country will be able to delight in this magical production, rather than limiting this to Birmingham only.