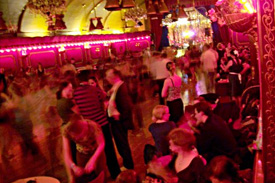 The Rivoli Ballroom in Lewisham, London, is a step back into dance history. In amongst many other activities, it is the setting for the annual UK International Same-sex Ballroom and Latin Dance Competition. The event has taken place every year since 1998 to celebrate the anniversary of the Pink Jukebox social dance club in 1996 for LGBTQ people, and the competition and ball has taken place in the Rivoli Ballroom since 1999.

At least 50% of those that take part in the event are from abroad, from places such as America; Spain; Germany; Holland; Finland; France and many other countries. In terms of UK competitive Same-sex Ballroom and Latin dance events, there is a very welcoming atmosphere, with a free buffet, hosted housing, trophies, and a team of stewards who make sure the event runs smoothly and to time.

Unlike other competitions there is no pre-arranged order of hierarchy: anyone can enter, from the total beginner to the top professional. The ‘A’ level is made up mainly of professionals and teachers, whereas the lowest level can be those who have only been learning a few months, and can do a basic quickstep and waltz or cha-cha and jive. Every dancer performs two selection rounds, where judges place people in the correct category, and the competition begins. Those who are less experienced are hugely encouraged as it may be their first competition, and this makes the event at the Rivoli hugely popular.

The competition has strong potential to be the biggest and most popular event of its kind. The next event will take place in February 2018: don’t forget, anybody is welcome to compete, with a partner of the same-sex. The Pink Jukebox Trophy will be held on 17 February in 2018, at the Rivoli Ballroom.