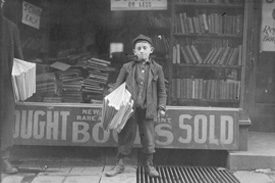 Audiences will soon be able to experience the Tony® Award-winning musical NEWSIES in cinemas for the first time this month, when it makes its cinema debut in the UK, Germany, Australia and New Zealand, following a cinema launch in the US. Produced by Disney Theatrical Productions, the show is based on the 1992 film: it went on to become Disney’s single most requested title to be adapted for the stage.

NEWSIES, the Broadway Musical, features a Tony® Award-winning score with music by eight-time Academy Award® winner Alan Menken (The Little Mermaid, Beauty and the Beast, Aladdin) and lyrics by Jack Feldman, and Tony Award-winning choreography by Christopher Gattelli. The production was inspired by the ‘Newsboy Strike of 1899’. It is set in New York City at the turn of the century and tells the tale of newsboy Jack Kelly, a charismatic and rebellious leader of a group of “newsies” who dreams of a life far from the hardship of the streets. When publishing titans raise distribution prices at the newsboys’ expense, Jack rallies his newsies to strike.

NEWSIES played on Broadway from March 2012–August 2014 and went on to tour the US from October 2014–October 2016. It is set to delight audiences in cinemas across the globe, especially with Jeremy Jordan (Supergirl, The Last 5 Years) reprising his Tony Award-nominated performance as Jack Kelly.

Disney Theatrical Productions, a division of The Walt Disney Studios, was formed in 1994. Worldwide, its nine Broadway titles have been seen by over 160 million theatergoers and have been nominated for 59 Tony Awards®, winning Broadway’s highest honour 20 times. With more than 20 productions currently produced or licensed, a Disney musical is being performed professionally somewhere on the planet essentially every hour of the day.