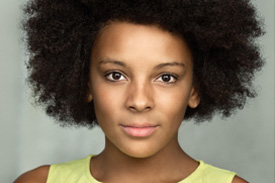 Her TV and film credits include; Giff Gaff ‘Part Of The Movement’ commercial, Dancer in ‘Moving Southwark’, and Isabella in ‘1001 Inventions and The Library of Secrets’.

Courtney has had a role created for her in a new comedy project for TV starring Sarah Hadland, called “Born To Dance”: she looks forward to filming in the future.

Yes – I’ve grown up around dance as my mum was my dance teacher, and it was such a big part of my family and life! I’ve danced since the age of two and it was always something that I wanted to do with my life.

I trained at Laine Theatre Arts and it was the best three years! That kind of training is always going to be intense and it requires so much hard work, but I loved every aspect! I learnt so much that has carried through into professional auditions and work.

The audition for Grease was such a fun process. It began with a dance round, held by the choreographer Nick Winston, which was a routine that had a modern spin on the original 50s style. Then we had a singing round – we sang a song of our choice in the style of the show. For the final round we had to sing material from the show, but the most interesting part was that we had to write and perform our own monologue based on a character from the show. This shaped how our characters in the show were formed.

Rehearsals for Grease were amazing but lots of hard work. There was a lot required from us, not just in terms of learning the material – the songs and dances – but also characterisation and ‘finding’ who we were in the show. This was really important to the director Nikolai Foster, and he was so clever with helping bring out individual characters. For me the hardest part was actually learning how to baton twirl for the cheerleading scene – lots of bruises and dropped batons involved in this!

What is your favourite part of the show?

It’s hard to say but I do think my favourite part of the show is the Hand Jive – it’s so cleverly put together! There is so much going on and it just shows off everyone’s strengths and individualities, but brings us together at the end. And it’s just so fun to perform!

We are required in the theatre early for warm up so it differs depending on whether it’s a one or two show day. I usually like to have the mornings to myself and get little jobs done, and then into work for warm ups and onto the show/shows. After the show I can never normally go to bed straight away – I need time to come down! So I usually go home and eat, and then just chill out until I’m ready to sleep!

What’s the best thing about performing?

The fact that you get to do what you love every day! I constantly feel so lucky to be able to do this, and grateful to have a job that I love!

And the worst thing?

It can be really tiring, not just physically but mentally. The hardest thing is probably when your body’s tired and you have aches and pains or injuries, and not being able to show it! I remind myself that each audience, every night, has paid to be here so you have to give them the best you can!

Not really – I tend to have little things that come depending on the show or the number… like the baton twirling in Grease. All the girls hold our batons up together before we go on in the hope that we don’t drop them on stage! (But this doesn’t always work!)

Something that my mum taught me… to grab every single opportunity that you can and give your everything to it! And that never ends – I’ve always been taught to continue learning in anything I do. If you love it then the hard work always outweighs what it brings you!