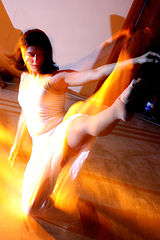 With the now mainstream TV entertainment programmes such as So You Think You Can Dance and Got To Dance, dance culture has shifted in the UK.

Before the emergence of programmes of this type and of this popularity, contemporary dance and lyrical jazz techniques were less ‘discovered’: ruling the day was ballet, tap and modern jazz, with the increasing growth of hip hop and street dance.

Large performing arts institutions offering dance classes on a huge scale, such as Pineapple, Danceworks and Studio 68, offered and continue to offer an abundance of daily classes to all ages and abilities. Whilst lyrical and contemporary classes were on offer to the attendees of the classes, it seems the growth of the dance television programmes has increased their popularity. Moreover, the style of lyrical, lyrical jazz, contemporary and contemporary jazz has shifted completely, with classes now offering both the technical side of these styles as well as the steering the performance qualities seen on the programmes.

Despite the technical side of dance, the television programmes convey a prominent sense of intention behind the movement in addition to a ‘jazzy’ narrative. Telling a story through dance is not a pre-requisite yet it seems for television this is desirable in order to appeal to the entertainment of the mass audiences. This is in addition to relating the movement through screen and making it desirable for its environment, namely a competition. As a result, the dazzling leaps, high kicks and multiple turns have made their way into mainstream, everyday classes; not necessarily a good or bad thing, simply an observation that these movements and choreographies are becoming increasingly popular.

Purely technical classes, however, have not disappeared, just added to by this increase in popularity of the dramatic and heartfelt movement portrayals on television. Dancers who look for both sides of the lyrical dance coin now have the added benefit of a certain sense of performance behind the class.