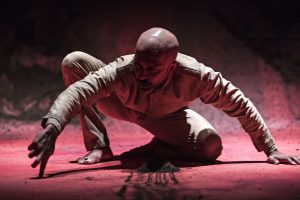 After celebrating its tenth anniversary on the Ipswich waterfront last year, DanceEast begins the new decade with a highly anticipated Spring season, featuring two premieres.
The season commences with Enowate. Making his Ipswich debut, Dickson Mbi presents Enowate, which translates as ‘truth stands’, inspired by a personal trip Dickson took to his family ancestral village in Cameroon. Enowate uses popping and contemporary dance to express Dickson’s inner dialogue – as if he is a man speaking to his shadow. The performance will tell a story that is both intimate and one that everyone can relate to, asking the questions ‘who am I, and why am I here?’.

Following the success of his award-winning full length solo XENOS, Akram Khan Company will be premiering Chotto Xenos – a captivating dance production that takes young audiences back in time. Exploring the often forgotten and untold stories of World War I colonial soldiers, the piece shines light on our present and future. There will be several workshops designed for families including a dance workshop for 7 to 11 year olds led by Akram Khan Company.

Botis Seva presents BLKDOG, a genre-defying blend of hip hop dance and free form antics. The piece, co-produced by Far From The Norm and Sadler’s Wells, presents a haunting commentary on surviving adulthood as a childlike artist, exploring the inner battlefield of an ageing artist, trying to retain his youth. Performed by Botis’ powerhouse company Far From The Norm, BLKDOG searches for coping mechanisms in the ultimate hunt for acceptance.

National Youth Dance Company, run by Sadler’s Wells, will be closing DanceEast’s Spring season with the premiere of their latest staged work. This year they will collaborate with multi-award-winning choreographer and DanceEast’s resident artist, Russell Maliphant. Thirty-nine young dancers present a new contemporary work, exploring the relationship between movement, light and music.