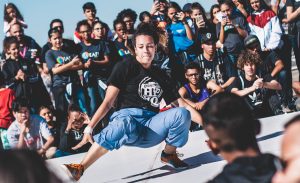 ZooNation: The Kate Prince Company’s award-nominated Some Like It Hip Hop returns to The Peacock for a run from Wednesday 23 October – Saturday 9 November, following a UK tour. Some Like it Hip Hop is directed by Sadler’s Wells Associate Artist and ZooNation founder Kate Prince and features music by DJ Walde and Josh Cohen.

The celebrated production had audiences on their feet at its world premiere in 2011. The acclaimed show unites sensational dancing with a clever and engrossing storyline, set in a city where books are banned, and where women are kept subservient to men. With a nod to Billy Wilder’s film and Shakespeare’s Twelfth Night, the comical tale of love, mistaken identity and revolution is played out in the company’s trademark style.

Audiences of over half a million come to Sadler’s Wells’ three London theatres each year, with many more enjoying its touring productions at venues across the UK and around the world. Sadler’s Wells commissions, produces and presents more dance than any other theatre in the world, embracing the popular and the unknown. Since 2005, it has helped to bring over 170 new dance works to the stage, many of them involving its 16 Associate Artists, three Resident Companies and four Associate Companies – the most exciting talents working in dance today.

Sadler’s Wells is set to open an additional mid-scale venue in east London in 2022. The new space will be at the heart of the East Bank project, a new cultural and education district in Queen Elizabeth Olympic Park in Stratford, which will also include BBC, UAL’s London College of Fashion, UCL and the V&A in partnership with the Smithsonian Institution. As well as a 550-seat auditorium, Sadler’s Wells’ new venue will include a choreographic centre and a hip hop theatre academy.