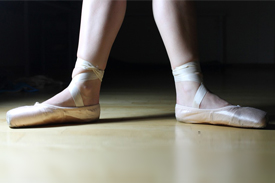 Often turnout can be both a physical and mental struggle for dancers. It seems that for most teachers, the words ‘turnout’ and ‘hips’ are their most commonly used, encouraging the dancers in their classes to turnout from the hips. Dancers sometimes only turnout from their feet, not engaging their knees and hips in the process, and in turn placing strain on these parts of the body. Additionally, perfect or near-perfect turnout can seem like an unattainable goal, along with 32 fouettés, 180 degrees extensions, and winged feet.

In terms of anatomy, some dancers simply do not have the bodily capacity for flat turnout – sometimes people are just born with hips that are easier to turn out. Some suffer from femoral anteversion in which the toes point inward, making turnout difficult for the dancer. Others have femoral retroversion, the opposite, meaning the dancer may have a natural turnout of up to 180 degrees. Individual turnout of dancers differs hugely, but anatomy is not an excuse for not having good turnout.

Additionally, the muscles of the thigh and gluteus maximus are used for turnout, however the latter is often incorrectly used as the primary muscle for this. While it is the biggest muscle involved, the six muscles required lie below the surface. These are built exclusively through ballet and become a key part of technique.