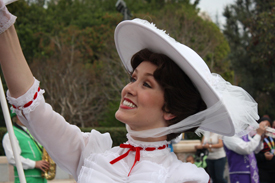 The hit musical Mary Poppins, which originally ran in the West End from 2004 to 2008, is being revived for London’s West End, running from October. It was originally directed by Richard Eyre with co-direction and choreography by iconic choreographer Matthew Bourne, playing to huge audience acclaim.

Mary Poppins will return to its original West End home at the Prince Edward Theatre where, after three years in London, Disney’s Aladdin will end its run late August. Starring Zizi Strallen, who returns to play the title role following great acclaim on the recent sell-out international tour, and Charlie Stemp as Bert, who last year gave an award-winning performance as Arthur Kipps in Cameron Mackintosh’s production of Half A Sixpence and recently made his Broadway debut in Hello, Dolly!. Tickets will go on sale in January 2019

Since the production was originally staged the producers have found even more magical ways to stage this timeless tale. In the 15 years since the production was last on UK stages, there have been many industry developments of note; perhaps most notable is the fast-growing success and popularity of original choreographer Bourne’s work. Mackintosh is said to be delighted to be bringing the production of Mary Poppins back to the UK, following the journey of the musical around the world, spreading Mary’s magic.

The magical story of the world’s favourite Nanny arriving on Cherry Tree Lane has been triumphantly and spectacularly brought to the stage with dazzling choreography, incredible effects and unforgettable songs. The multi award-winning creative team is led by director Richard Eyre, with co-direction and choreography by Matthew Bourne, co-choreography by Stephen Mear, set and costume designs by Bob Crowley, lighting design by Natasha Katz, sound design by Paul Gatehouse and orchestrations by William David Brohn.

The stage production is co-created by Cameron Mackintosh and has a book by Academy Award®-winning screenwriter and Downton Abbey creator, Julian Fellowes. The score by Richard M Sherman and Robert B Sherman includes the classic songs Jolly Holiday, Step in Time, Feed the Birds and Supercalifragilisticexpialidocious with new songs and additional music and lyrics by the Olivier award-winning British team of George Stiles and Anthony Drewe.