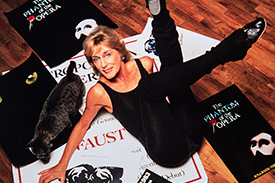 An evening of stellar performances in celebration of the prolific and dearly-loved director choreographer Gillian Lynne DBE will take place on 2 July at The Gillian Lynne Theatre, Drury Lane in London. A year and a day after Gillian sadly passed away, ‘To Gillie, With Love’ will see stars of the world of dance, theatre, film and TV come together to show their admiration and thanks to this unique and remarkable individual, who helped, guided and inspired so many.

The evening will also feature a choir with students from Arts Ed and the Royal Academy of Music.

As well as honouring Gillian, the evening will launch the Lynne and Land Foundation, which Gillian and her husband Peter Land established to enable talented young performers to achieve their dreams by providing scholarships and grants to reach their full potential in the choreographic arts, drama and musical theatre.

Gillian Lynne’s career started at the age of fourteen: leap-frogging from the Sadler’s Wells Ballet to Star Dancer at the London Palladium, to a film opposite Hollywood royalty Errol Flynn. It was this original style and energy that helped make Gillian the leading director/ choreographer of her generation; best-known for her ground-breaking staging and choreography for Cats, The Phantom of the Opera, Aspects of Love and Chitty Chitty Bang Bang. She directed over 60 productions in the West End and on Broadway; worked on 11 feature films and hundreds of television productions as producer, director, choreographer or performer.