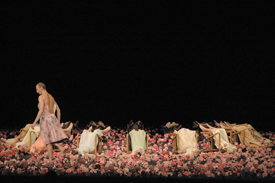 The unmistakable style of Tanztheater Wuppertal Pina Bausch was forged over decades performing Pina Bausch’s huge catalogue of works. Following the choreographer’s death in 2009, the company has embarked on the expansion of this repertoire with new works by two choreographers.

New Piece I – Since she marks the first work that Greek choreographer Dimitris Papaioannou has created outside of his own company. Trained as a visual artist, Papaioannou’s work is renowned for its dream-like atmosphere, inhabited by a circus of contorted and absurd creatures. The choreographer recently received critical acclaim for his work The Great Tamer, performed at Sadler’s Wells in October 2018 as part of Dance Umbrella.

Norwegian choreographer, director and award-winning playwright Alan Lucien Øyen creates the second new work, New Piece II. As resident choreographer of the Norwegian National Ballet and for his own company winter guests, Øyen seeks to reflect the human experience using dance and text. Through three two choreographers Sadler’s Wells is able to welcome Tanztheater Wuppertal back to the stage. These two pieces, the first to be created for the company by guest choreographers, promise a new and thrilling take on the company’s unforgettable style of dance theatre.