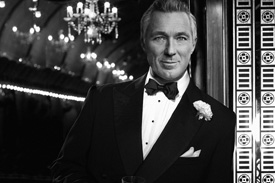 Martin Kemp will star as smooth-talking lawyer Billy Flynn in the multi award-winning CHICAGO at the Phoenix Theatre in London’s West End from 2 July for a limited season (until 1 September). The rest of the cast appearing alongside Kemp are still to be announced.

Martin Kemp’s acting credits include Reggie Kray, alongside his brother Gary as Ronnie Kray, in the film The Krays, Steve Owen in EastEnders, and Sam Phillips in the UK tour of Million Dollar Quartet. He is also one quarter of the band Spandau Ballet, and his book, True – An Autobiography of Martin Kemp, spent several months in The Sunday Times bestsellers list. Kemp also appeared as a judge on the BBC’s Let It Shine, alongside Dannii Minogue and Gary Barlow.

Following a successful UK and international tour, and after a five year absence from London, the Kander & Ebb musical, winner of six Tony Awards, two Olivier Awards and a Grammy, began performances at the Phoenix Theatre in London on 26 March. The musical is booking until 6 October 2018.

CHICAGO originally ran in London for 15 years, making it the West End’s longest running revival. It opened at the Adelphi Theatre on 18 November 1997 to rave reviews and immediately became a sell-out hit. CHICAGO won the 1998 Laurence Olivier Award for ‘Outstanding Musical Production’ as well as the 1998 Critics Circle Drama Award for ‘Best Musical’. CHICAGO transferred from the Adelphi Theatre to the Cambridge Theatre in April 2006, where it ran until 27 August 2011. The show then opened at the Garrick Theatre on 7 November 2011, where it ran until 1 September 2012.

Since it opened in New York in 1996, CHICAGO has played in 36 countries worldwide, and been performed in English, Dutch, German, Swedish, Spanish, Portuguese, Russian, Italian, French, Danish, Japanese and Korean. CHICAGO continues to play on Broadway, where it celebrated its 21st birthday last year, and around the world in multiple languages.