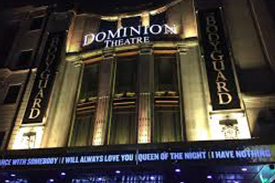 The highly anticipated The Bodyguard UK tour dates and venues have been announced, to the delight of fans across the country. The production will open at the end of the year, before embarking on a new UK tour.

The Olivier Award-winning musical is based on the 1992 Oscar-nominated film from Lawrence Kasdan. The film starred Whitney Houston, and the musical inspired by her work opened at the Adelphi Theatre in 2012, starring Heather Headley. Here the musical won Best New Musical at the WhatsOnStage Awards and was nominated for four Olivier Awards. Alexandra Burke also went on to star in the production, as well as Beverley Knight. Highly charged, the musical has been a huge hit.

Following its West End stint the musical toured for 18 months in 2015, before returning to the West End at the Dominion Theatre in 2016 with Knight in the lead role. With such star-clad names involved, there was little doubt as to the success of the musical. Popular with hen parties and large groups of women, The Bodyguard is a high-shine, energetic night out. Casting for the new tour is yet to be announced however.

The musical – both in the West End and on tour – tells the story of the amorous relationship between superstar Rachel Marron and her bodyguard Frank Farmer, and the consequences of her stardom and their relationship. The show is close to the hit film, and includes classic tunes such as “Queen of the Night”, “I Wanna Dance with Somebody” and “I Will Always Love You”.

The new Bodyguard UK tour opens at Glasgow Theatre Royal on 3 December and runs until July 2019. The show will tour to Hull, Southend, Liverpool, Milton Keynes, Bristol, Cardiff, Norwich, Canterbury, Southampton, Nottingham and Wolverhampton, with further dates to be released.