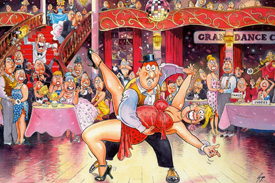 Strictly Come Dancing’s professional dancer line-up for series 15 has now been unveiled, with three new female dancers taking to the nation’s screens alongside the return of viewers’ old favourites too. The three new professional dancers are all champions from the Ballroom and Latin world; Dianne Buswell from Australia, Nadiya Bychkova from Ukraine and Amy Dowden from Wales. They will join Strictly Come Dancing when the award-winning series returns in September to BBC One.

Dianne Buswell is an Australian Open Champion and four-time Amateur Australian Open Finalist. She has appeared on Dancing With The Stars Australia and has been part of the Burn The Floor production on Broadway since 2011. Nadiya Bychkova from Ukraine is a two-time World Champion and European Champion in Ballroom and Latin ‘10’ Dance. She is a multiple-time Slovenian Ballroom and Latin Champion and has taken part in the Bosnian version of Strictly. Amy Dowden is from Caerphilly, South Wales and began dancing at the age of eight. She is the current British National Champion and one of the highest-ranking Ballroom and Latin American professional dancers in the UK. Amy is also a four-time British National Finalist and in 2015, she reached the semi-final of the World Championship.

The three new professional dancers will replace Joanne Clifton and Oksana Platero who are leaving the series, along with Natalie Lowe who previously announced she would not be returning. Joanne, the current Strictly champion, will return to the Strictly ballroom for one last time, performing the winners’ routine with her celebrity partner Ore Oduba at the start of the new series.