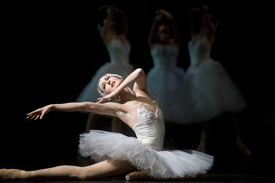 English National Ballet recently announced its dancer promotions and new joiners for the 2017/2018 season, with lots of news for the company.

Joining as Guest Artists next season are Jeffrey Cirio, Principal at American Ballet Theatre, who performs with the company for the autumn/winter season, and Oscar Chacon who reprises his role as Hilaron in Akram Khan’s Giselle. Jurgita Dronina joined the company as Lead Principal in July, and will simultaneously remain Principal at The National Ballet of Canada.

Aaron Robison joined as Lead Principal from San Francisco Ballet in June. Born in Coventry, he has received first place at many prestigious and international ballet competitions. Fellow British dancer Joseph Caley joins the company as Principal from Birmingham Royal Ballet. Caley has performed many of the leading roles in repertoire including Sleeping Beauty, Swan Lake, Giselle, Cinderella and Nutcracker, and has been a guest artist with the Australian Ballet.