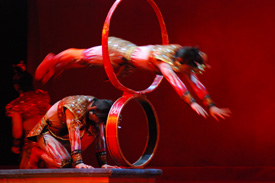 Christmas in Leicester Square, brought to audiences this year by Underbelly, is well underway and running until 8 January 2017. As a reimagined Christmas event in the heart of London’s iconic Leicester Square, it will feature a traditional Christmas market and Santa’s Grotto for families, as well as seeing the return of La Soirée, the Olivier Award-winning theatrical phenomenon. This will be its seventh season in the capital in the iconic Spiegeltent.

Not your normal everyday juggler, in a very short time Olivia Porter has already taken the circus and physical theatre world by storm with her innovative juggling style. Satya Bella has spent the last ten years spinning in circles and taking the hula hoop to the next level. Having undergone elite training with the Beijing Acrobatic School, Satya combines a display of grace, flexibility and multi-hooping. Aerialist Jarred Dewey has been swinging between both hemispheres since he burst onto the circus scene.

La Soirée has now seen over 75 artists take their place on the iconic red stage in over 25 cities, across five continents, with over 150 acts between them. Audiences and critics alike have been wowed by La Soirée’s ever-expanding, dysfunctional family since the company first played together in Edinburgh back in 2004. Over 5.5 million people have now seen La Soirée perform across the globe.