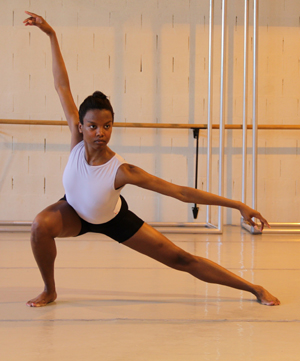 Carolyn Bolton was born in Columbia, USA, and trained at South Carolina Governor’s School for the Arts and Humanities, the Martha Graham School of Contemporary Dance and University of South Carolina. She joined Rambert in 2013 after working with the Wideman/Davis Dance Company, Unbound Dance Company, and Spartanburg Ballet.

Carolyn’s career highlights include performing with New York City Ballet in the USC Dance Company’s annual gala and featuring in the 2007 ETV documentary Sketches from Chronicle for the Martha Graham Company.

Carolyn has also choreographed works during the South Carolina Governor’s School for the Arts and Humanities year round programme, the University of South Carolina academic year and Summer Program, Benedict College After School Dance Program, as well as works for Litchfield Dance Arts Academy. In addition, Carolyn has choreographed solos for numerous dance competitions including the prestigious Youth America Grand Prix Competition.

I began dancing quite late, aged eleven. I auditioned for a dance programme at my local middle school in South Carolina and was accepted. Initially I was inspired to move by images on the television ranging from Olympic events, such as figure skating and gymnastics, to more fantasy based programmes like the Power Rangers. However it was seeing Julie Kent from American Ballet Theatre perform Le Corsaire that ultimately sparked my interest. I loved the music, costumes, and the beauty of each step and knew I wanted to dance too.

When I began dancing it was only for fifty minutes a day, five days a week. My school did an excellent job of exposing me to various modern techniques as well as classical ballet. They also brought in professionals, such as Carolyn Adams, to work with us and set established pieces like Donald McKayle’s ‘Rainbow Etude’. My teacher also encouraged me to take classes outside of school and provided me with free after school lessons at a local studio.

I have been performing for about fourteen years now. I started performing shortly after I started. My school would put on several productions a year, including one large production at the end of each year. I also had the opportunity to participate in performances with local companies in South Carolina.

I did my pre-professional training at the South Carolina Governor’s School for the Arts and Humanities. A typical day for me included a ballet technique class in the morning, followed by a pointe class, and three hours of repertory. I would then complete my academic course work and continue rehearsals into the evening. After rehearsals I would have about two hours of free studio space, so I would continue to work on my own choreography or improving technical skills. Each Saturday I would take either a Horton, Cunningham, or Jazz class in addition to my normal ballet class and rehearsal schedule.

A typical day now consists of a morning technique class either ballet or contemporary, followed by five hours of rehearsals.

I try to stay on top of my technique by taking daily classes provided by Rambert, as well as maintaining pilates exercises to target my weak areas.

The best part of performing for me is the silence and moment of stillness I feel when I step on the stage. It’s an indescribable feeling to have all the focus on you. It’s also a lot of pressure, and that knowledge of everyone watching you gives you an adrenaline rush which is unmatched by any other experience.

My greatest achievement to date is to be dancing for Rambert. I have had the privilege and honour to work with so many artists in America, but Rambert has truly opened a new world of dance to me. It is a pleasure to be in the midst of such talented and diverse artists each day.

Which part of dance do you enjoy the most?

I truly enjoy taking class every morning. For me class is a form of meditation; a way of centering the body, reconnecting with myself and getting in touch with how I am feeling each day. Class allows me to take risks and improve on my technique and artistry prior to stepping on stage.

I would advise someone aspiring to enter the dance industry to cherish every moment and opportunity presented. The dance world can be very fickle but it is vital to remember that ultimately, you are in charge of your destiny. It is important to persevere even when it appears things may not work out. By maintaining a positive attitude and looking for solutions rather than problems, achievement is inevitable.

I am looking forward to more touring and performing with Rambert. I am also interested in further exploring my choreographic vision while simultaneously teaching for companies/schools.