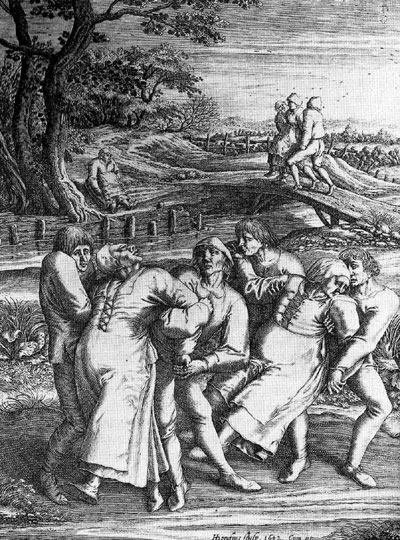 Almost 500 years ago a whole town was overcome with a “Dancing Plague” that saw people dropping dead from dancing, exhausted. This phenomenon has parallels with Romantic classical ballet Giselle, with Hilarion forced to dance to his death by the Wilis. Protagonist Albrecht, meanwhile, is saved by Giselle, her love for him just as strong in death.

The summer of 1518 saw a Strasbourg woman named Frau Troffea begin dancing intensely in the street, and refused to stop even after many hours and days. Within a week, one hundred people had been overcome by the same compulsion to dance and after a month, 400 people found themselves obsessively dancing into exhaustion without no explanation for their actions.

The authorities in Strasbourg even encouraged the dancers by hiring musicians to accompany them in the belief that they would recover by continuing to dance. It wasn’t long before dancers collapsed and died from heart attacks and exhaustion, and the dancing plague subsided after a few weeks. Some explanations for the epidemic include drugging (by psychotropic mould growing on stalks of rye that people accidentally ingested), cult involvement and mass hysteria.

1518 was not the first dancing plague of its kind: in that part of Europe cases stretched back to the late 1300s. Some suggest that the dancers were in a trance-like state, which allowed them to continue dancing despite their exhaustion due to the contemporary belief in St. Vitus (the patron saint of epileptics) who was believed to take over people’s minds and inflict compulsive dance. Already under psychological strain from the famine and disease that was common in Europe, it could be that people’s fear of the curse caused them to believe they had been possessed and induce themselves into a dancing trance.

These instances of dancing mania eventually died out in Europe, having claimed many lives.