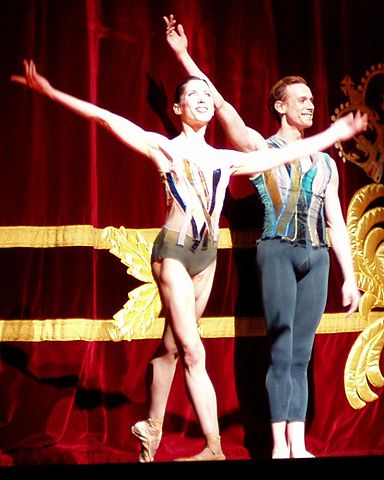 Leanne Benjamin, the recently retired Principal of The Royal Ballet Company, is perhaps one of the recently departed dancers who will be the most greatly missed. She recently appeared in Carlos Acosta’s Classical Selection, dancing roles in extracts from some of the best-loved classical and neo-classical pieces such as Mayerling and Manon, with passionate vigour and full commitment to the production.

The Australian Benjamin trained at the Royal Ballet School from the age of sixteen, and won the prestigious Adeline Genée (now Genée International Ballet Competition) prize and the Prix de Lausanne on her way to the top. She joined The Royal Ballet as a First Soloist in 1992 after dancing with Sadler’s Wells Royal Ballet, Deutsche Oper Ballet and London Festival Ballet (now English National Ballet). She was promoted to the rank of Principal in 1993 and since then has danced all leading (and very dramatic) classical roles such as MacMillan’s Manon, Romeo and Juliet and Mayerling. In addition to this Benjamin has had a number of roles created on her by choreographers including Wayne McGregor for his athletic Qualia, Christopher Wheeldon, Kim Brandstrup and Alexei Ratmansky.

This fiery and versatile dancer is renowned for excelling in the MacMillan repertory, yet Benjamin also worked with Frederick Ashton and Ninette De Valois: as a result she was awarded an OBE in 2005 for services to dance. Benjamin felt that performing Mayerling was the perfect way to step out of her ballet career as it was the piece which brought her into the company by Kenneth MacMillan, who died backstage soon after she joined the company. MacMillan acted as a mentor to Benjamin, changing her dancing career forever in seeing her potential at Berlin’s Deutsche Oper Ballet.

Benjamin give her final Covent Garden performance with The Royal Ballet with Mayerling earlier this year in June, a dramatic portrayal of false love and, equally, passion.