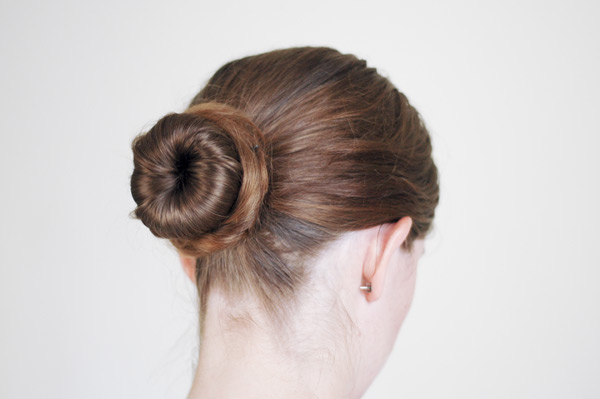 Sometimes one of the most problematic problems in the life of the dancer is not keeping up in class, long rehearsals or tricky performances: it might simply be the problem of the ballet bun. It can be notoriously difficult, sometimes, to perfect the height of the ponytail, the ‘largeness’ of the bun, or control how much it protrudes from the head.

Younger dancers, or dancers without so much hair, may prefer to use a ‘doughnut’ at times, a tightly coiled plastic ring device which is placed over the hairband of the ponytail with the hair then spread over the doughnut and secured in place by hair grips. However, those with longer hair are able to employ this technique without the use of the doughnut, achieving aesthetically pleasing results of a more modest bun and classical ballet hairstyle.

In order to achieve this look without the use of the doughnut, tie the hair in a mid-height ponytail. Tip the head down to look at the floor and spread the hair evenly over the hairband securing the ponytail. As with using a doughnut, sweep the hair around into a doughnut shape by twisting all the parts around the hairband and securing them with hair grips and Kirby grips. Here you can work to make the bun as flat or as round and pert as you would like or is required.

The more hair you have, sometimes the harder it is to secure it neatly. However, this method is a successful way of making all that hair look neat, without using methods such as twisting the ponytail first and winding it round the hairband, which can look bulky and uneven, or plaiting the ponytail before the same action, which does not produce the look of a classical hairstyle.