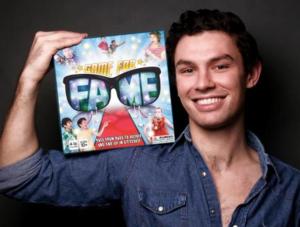 Jersey Boys actor David McGranaghan, who is currently starring as Nick Massi in the hit West End musical, has launched the board game Game for Fame. David teamed up with fellow actor Joseph Pitcher to create Game for Fame, where you ‘race from rags to riches and end up in stitches’.

The game has gained a large following due to its tongue-in-cheek view of the celebrity world and has recently been ranked in Amazon’s top 5 selling board games. David puts the success of the game down to its originality, inclusivity and humour, with the challenges both competitive and fun. David runs the business during the day with business partner Joe and then stars in Jersey Boys in the evening, which is the best of both worlds for him.

Jersey Boys tells the remarkable true story of Frankie Valli and the Four Seasons and their rise to stardom from the wrong side of the tracks. These four boys from New Jersey became one of the most successful bands in pop history, were inducted into the Rock & Roll Hall of Fame and sold 100 million records worldwide, all before they turned 30.

The musical is the winner of 54 major awards worldwide, including the Olivier Award for Best New Musical. The show originally opened on Broadway in 2006, receiving the Tony Award for Best Musical. As well as still running on Broadway and in the West End, Jersey Boys can be seen in Las Vegas, across the United States on its US National Tour, and in Perth, Australia, and will open soon in Cape Town, South Africa and the Netherlands. The musical will be transferring to the Piccadilly Theatre in March 2014, with the last performance at the Prince Edward Theatre on Sunday 9 March.