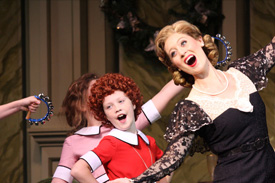 Much-loved comedian Miranda Hart is set to make her West End debut in the musical Annie, playing the notorious Miss Hannigan in Nikolai Foster’s show. Foster will direct the new production of Annie at the Piccadilly Theatre, London to open in May this year, a distinct change for Hart renowned for her stand-up comedic talents. Musical theatre will be a new string to her bow, with fans anticipated to support the star’s venture into singing, dancing and acting.

Based on the comic strip Little Orphan Annie, the musical is set in 1930s New York during the Great Depression, and follows Annie who is forced to live a life of misery in Miss Hannigan’s orphanage. The musical has a book by Thomas Meehan, music by Charles Strouse and lyrics by Martin Charnin, and has been recreated from the iconic and original film resulting in a version starring Cameron Diaz as Miss Hannigan and the addition of some musical numbers.

For Hart, Miss Hannigan, which was played by Carol Burnett in the 1982 film, is a “dream role”. At present Hart is best known for her BBC sitcom Miranda, and her theatre credits include Cruising (Bush Theatre), Come Out Eli (Battersea Arts Centre) and All About Me (Soho Theatre). Hart appears to have found her musical theatre calling, with a new spring in her step a result of the enjoyment she gets from performing and rehearsing the musical.

The last West End production of Annie opened at the Victoria Palace Theatre in 1998, so it is many years since the city has seen any version of the musical. It will soon be ready to open again in London, and Annie will run at the Piccadilly Theatre from 5 June 2017 to 6 January 2018, with previews from 23 May.