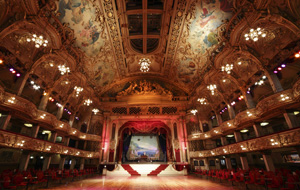 The BBC recently announced its professional dancer line up for the hit television show series Strictly Come Dancing 2016. A highlight of the dancing year for many, the series is always highly anticipated and has gone from strength to strength year on year. With other celebrity talent competition, such as Dancing on Ice, falling by the wayside, Strictly has continued to be popular.

With some departures from the Strictly Come Dancing professionals there are also some new faces. There will be three brand new dancers perform alongside the return of viewers’ favourites. New to the line up are world-class Latin and Ballroom dance experts including World Champion Katya Jones, Ukrainian Champion Oksana Platero and Spanish dance professional Gorka Marquez. The most recent series of Strictly saw the team win both an NTA and BAFTA Television Award, so the stakes are high to continue this winning streak.

Returning to the Strictly dance floor are the male dancers, Anton du Beke, Brendan Cole, Kevin Clifton, Pasha Kovalev, Aljaž Škorjanec, Giovanni Pernice; and the female dancers returning are Karen Clifton, Natalie Lowe, Joanne Clifton, Janette Manrara and Oti Mabuse. Professional dancers Tristan MacManus, Ola Jordan, Kristina Rihanoff and Aliona Vilani announced at the end of last series that they would not be returning to the show, as well as Gleb Savchenko who has decided that due to family commitments he will not be appearing in the next series. Additional professional dancers to join the Strictly team will be announced in due course.

The hugely popular Strictly Come Dancing returns to BBC One in the Autumn when the celebrity line-up will also be revealed. Some existing rumours have been circulating as to the celebrities who may take part; it is clear that the 2016 Strictly will be just as fabulous.